The view from Sacré-Coeur was great. As the terrain in the center of Paris is relatively flat, I could look over the city from there for the first time after coming to Paris.

We found a map at the side of the stairs in front of Basilique. The cityscape of Paris seen from the Sacré-Coeur in 1939 was drawn. I was surprised that there was no big difference between the current landscape and the picture drawn. I wonder if there is a “mega” city that has not changed the figure for 80 years in Japan (Even in Kyoto, the city/landscape has changed a lot except historical sites and a part of areas). The change of the cityscape in Tokyo is tremendous.

Things around us in Paris and Tokyo, for example are almost same. However, I came up with the question that how the difference in the speed of changes in buildings and landscapes affects our daily bodily experiences and feelings. 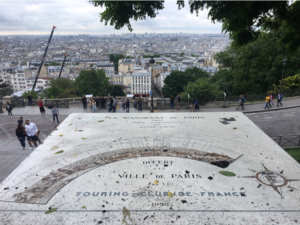 Several vending machines for commemorative coins were lined up inside Basilique. It seems that the placement of these commercial artifacts in sacred places is not uncommon in many countries.

This kind of difference in how things/artifacts are shown was interesting to me. 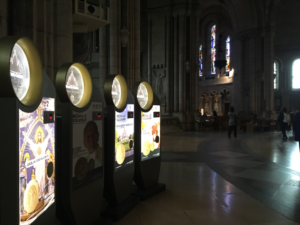 Angels in the statues and paintings have wings when we visit western churches. To be honest, I have been curious about that for some time. I also could found such angel sculptures on the huge pillars supporting the Basilique (There was also a painting of an elderly angel in the atelier visited on the way).

I have read a book or article that mentions the angel did not have wings from the beginning. In fact, unlike angels, probably, I have never seen gods with wings. At best, they are clad in something like a veil. We can find such artistic expressions of Gods in Japan. However, Japan's heavenly maiden like the angel in western countries has no wings and flies in the sky with a veil called hagoromo.

At least, in Japanese art history and temples/shrines, it could not hardly be seen the expression manner combining the part of animal with a body of human being like the case of the wings of angel and the legs of Centaur. An expression of anthropomorphizing the animal itself can be seen in Chōjū-giga (Japanese animal caricatures in around 13th century: They are referred to as Scrolls of Frolicking Animals.).

The differences of the views on human and animal, and the difference in how to draw them are impressive. 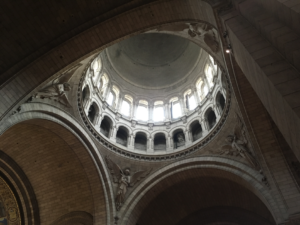 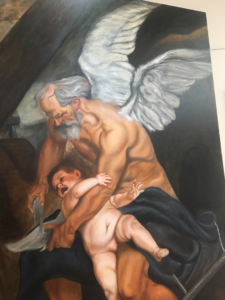 We were able to stop by an atelier, which located in the place a little down the hill of Sacré-Coeur. Various things including oriental paintings and objets were displayed in the space where soft sunshine was pouring. I felt that the time seemed to flow slowly and the space was a little bit far from modern time. I wonder if there was an atmosphere like this in the past workplace.

I met a painting whose motif is Japan there. A hawk flying around Mt. Fuji was drawn. As soon as I saw Fuji and a hawk, I was reminded of the phrase, Ichi (the first)-Fuji, Ni (the second)-taka (hawk), San (the third)-Nasubi (eggplant). It is said that it would be auspicious if we could see them in our first dream of the New Year. However, at first glance, I could not find an eggplant, and I felt a sense of being inadequate a little (in fact, as I looked the painting carefully after going home, I perceived that it looks like the flowers of eggplant are drawn). I wonder if the sleeping woman is in the first dream.

When I just tried to leave the atelier, I glanced at the kitchen. Then, a Mario's drawing caught my eyes (If I were not born in Japan, I might not have been able to notice this drawing). I smiled involuntarily because I felt like this small drawing brought me back to the modern age. 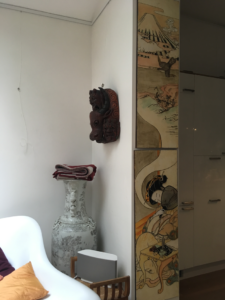 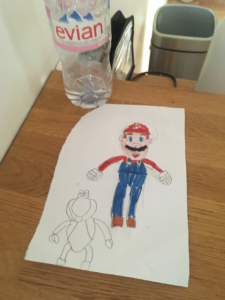