“Entrepreneurship is an incredible Odyssey whose leaders are the heroes”. These were the first words of the organizer of the 7th Printemps des Entrepreneurs in Lyon (France), where we spent a whole day with students from emlyon business school. Why? To experience real-life working conditions. How? We led an Open Walked Event-Based Experimentation (OWEE) in this context to help them to get the most out of the event. In a nutshell, we lived a spatio-temporal odyssey in and around the fair to grasp, all together, what is at stake in entrepreneurial journeys and what could be the future world of organizations.

On April 24, 2018, at 8am, about thirty red dressed students gathered in front of the Double Mixte, a well-known business event hall. They are double-degree students in innovation management who proudly wear the same red t-shirt, the official school colour. They are far from being the only students present in the alleys of this annual trade fair organized by the main french employers syndicate. But the students in red are not here by chance. They were not looking for business contacts – even if they got some! They were not running the school booth – even if their visible presence during the fair greatly advertised the school. They came – because we asked them to, of course, but then – to collectively answer the broad question underlying the event: “For you, ‘companies of tomorrow’, what does it mean?”.

Seeing and being seen in this kind of business gathering is undoubtedly one part of their future work practices as managers, leaders, or entrepreneurs – whatever one thinks of the usefulness of these events. As students, they already face number of large events such as careers days to find internships and first jobs. But they usually don’t really know how to behave and underestimate what they can get from such gatherings. On this particular day, we did not teach them how to dress or to pitch in this kind of context. In line with an experiential learning lens, we let them make their own experiences in the field, after having created the conditions to make it happen. We adapted the OWEE protocol to this new context – a learning expedition mainly with students in a closed event space – to turn them into active and reflexive visitors of the fair.

First, students split into four groups to tackle the issue of what tomorrow’s company would look like from four different perspectives – new work and organisational forms, internal and external stakeholders for tomorrow, time & space relationships of tomorrow’s company, alternative managerial tools and methods. Then they assigned roles to the group members to gather information about their odysseys. Some were in charge of taking notes – on paper and on the collaborative open platform framapad, others of taking pictures and films, and last but not least, of drawing or innovating in the manner of gathering information. Everybody was allowed and encouraged to be also visible on social networks – twitter, facebook, instagram… One person per group was in charge of collecting everything in name of his/her group and to send it to the community manager of the class who retweeted and posted in real time in the blog and the official twitter account of the program. Each group had a dedicated coach (a professor or a PhD student members of RGCS). This organisation was implemented the afternoon before the event. 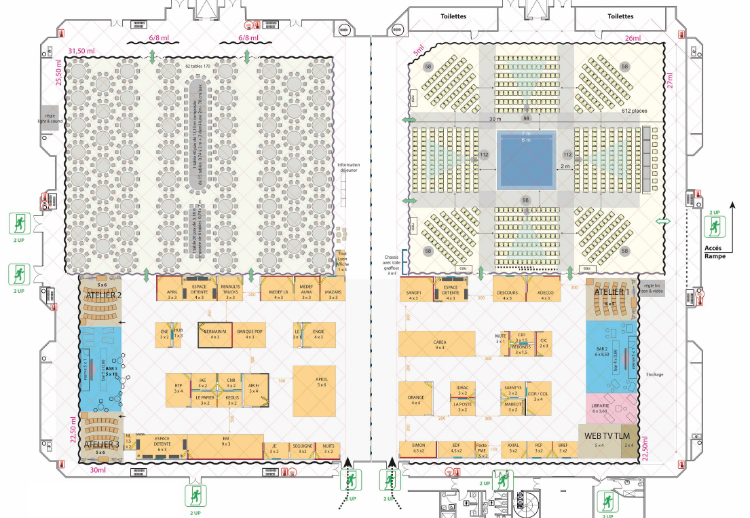 D-day was separated into three moments:

1/ In the morning, groups freely occupied the fair space and time by attending plenary sessions and small workshops, moving from booth to booth, interviewing exhibitors and visitors… One intermediary meeting point with the four groups at the school booth was organised mid-morning. It was the inspiration phase. 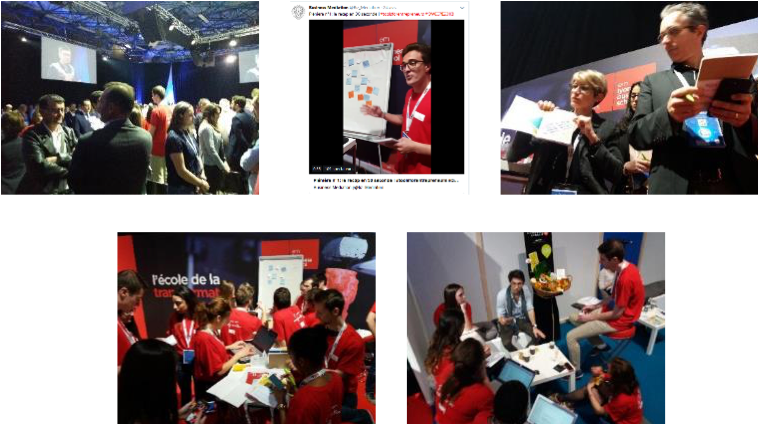 2/ After lunch, we all met in front of the Double Mixte. It was a very sunny and hot day in Lyon whereas the fair was in a large room with neither daylight nor air-conditioning… We could not stand to say any longer in this room. Thus we walked together along the tram line in order that the four groups – students and coaches – formulate and iterate their views on tomorrow’s company. At each tram stop, we took a break and repeated the pitches of each group in front of the entire cohort. Two additional coaches helped us to give rhythm to these two hours around the fair and keep the time.

3/ Mid-afternoon we went back to the event room – and were nicely surprised by the reparation of the air-conditioning system! One student per group was chosen to pitch in one minute in the final plenary session of the event. The four selected students stand at each corner of the central scene (see the middle picture below). One coach was also in charge of pitching RGCS and OWEE to introduce the students’ pitches! To close the day, the organizers invited the Philosopher and Theologian Samuel Rouvillois in his traditional monk’s habit to preach a humanistic view of tomorrow’s company.

Our pedagogical aim was to raise awareness among students of how easy but inefficient it is to attend this kind of events as tourists. Especially in the field of innovation and entrepreneurship, where such fairs are legion and so shiny. Experiential learning experiments do not aim to make them dream of futuristic digital technologies or being the next Zuckerberg, but to expose them to the true reality of work practices – even the unpleasant and unfair ones. For example, students were very surprised to see the gap between their vision of entrepreneurship and the fairly classical and formal worldview offered by this fair – despite its name « springtime of entrepreneurs »!

The OWEE was a great pedagogical tool to demonstrate that attending such events without any plans, goals, and methods, means losing time, money, and missing opportunities. To put it in another way, experimenting, whatever you experiment is, leads to nowhere if you don’t take the time to think about what you are experimenting. But we still have to imagine new types of assessment and feedback to students (Warhuus, Blenker, & Elmholdt, 2018) to generalise and legitimise this kind of practice-based approaches. OWEE is an easy and cheap – but time and energy-consuming – innovative experiential learning approach that comes back to basics: walk together, like Aristotle and his disciples. Following the tradition of Peripapeticians’ practice, OWEE builds knowledge from the facts given by experience. OWEE gave the occasion to turn an individual practice – attending a fair – into a collective value creation of meaning – creating a common vision of future of work.