The debate is quite old. Machines, and then robots, have always brought fears and fantasies about unemployment and the brutal disappearance of skills and meaning.

With the rise of the so-called industry 4.0, fear is back. I believe that more than ever, it is a justified fear. Technology has never been more likely to replace human being in many activities. All intellectual and manual skills are involved. From taxi-drivers to traders or teachers, all professions are under the threat of new metallic and digital monsters. Even research and development seem to suffer from the dramatic increase of artificial intelligence, which for sure soon will also replace part of the invention activities… Journalists keep repeating a very sad prophecy: among half of the jobs we know would disappear in the coming years (see figure below). 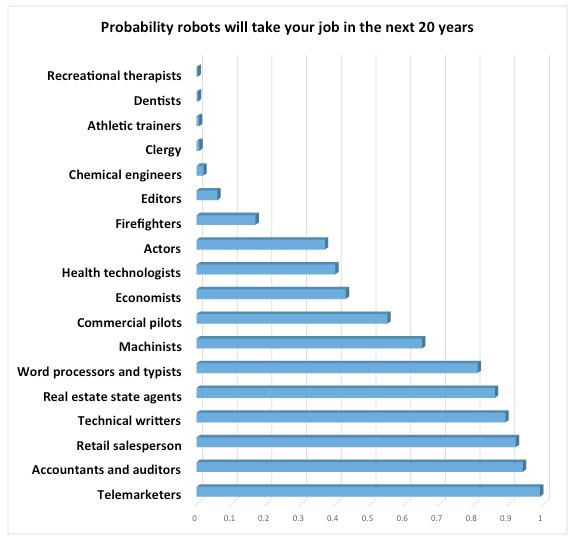 Source: François-Xavier de Vaujany, with data from The Economist.

What could remain as the ultimate bastion of the human world? Current ideology is quite pessimistic about it. Implicitly, I would say that only one activity would remain deeply human: entrepreneurship.

Why? Precisely because it is much more than something that can be ‘done’ by ‘someone’ or ‘something’ else. It is more than ever a community-based, emotional and embodied phenomena. It is a set of people and of objects who jointly produce — socially and materially — the entrepreneurial structure and its corresponding set of innovations. A charismatic leader is just a moment and a space of crystallisation in this broader move towards something. Entrepreneurship is much more than a skill, a profession or a job. Most co-working spaces clearly illustrate this. Entrepreneurship is an emotional exercise. The key promise of most co-working spaces is “you will not be alone in your apartment’, ‘you will join a community’ (see e.g. the example of Wework, Betahaus or Galvanize.

Events in the context of co-working spaces are opportunity to pitch, to network, to play, and create practices and processes well beyond that of the entrepreneur herself. The entrepreneur becomes the puppet of her project as much as she is the actor of it. And always, entrepreneurial dynamic and innovative dynamics are deeply emotional. They are a necessarily shared emotion between the initial-entrepreneurs, coworkers, pieces of furniture of the space, mobile technologies, real or fantasised customers, etc.

Let us imagine a robot and a program who could both produce a business model, talk about it, sell it, connect with other people and push it. A robot which would be deeply anthropomorphised. At the end, this process would make of the robot an entrepreneur. Should this happen, the final process would always be beyond the scope, power and agency of the robot itself… because such is the essence of entrepreneurship (which is beyond and far different from the automation of the assembly line of a car manufacturer).

And what would stop a particularly dangerous entrepreneurial process will always be a collective emotion far beyond what robots could produce or reproduce. This would be the crossed, complex negative emotions shared between people who feel shocked, vexed, uncomfortable and ashamed of a situation.

Robot(s)-entrepreneurs will never exist… or should they exist, entrepreneurship, as we know it… would have disappeared.

To conclude, I would like to come backs to the ongoing – quite fatalist – debate about robots and industry 4.0. More than ever most countries and cities face political decisions. These transformations have deep political and societal implications. Are they really discussed and regulated (globally and locally) by current political powers? I do not think so. And I think they should. What also may disappear with jobs replaced by robots is the institutional reality of most jobs and occupational communities: self-regulation and exogenous regulation mechanisms (which for sure will not be among the qualities of robots, even as connected objects). A job, as a human activity, is also a legitimation and de-legitimation activity.

I deeply respect entrepreneurship, but I do not dream of a world were the last human activity would be entrepreneurship and most human beings would become spectators just looking at movements around. A task for sure a robot can do…